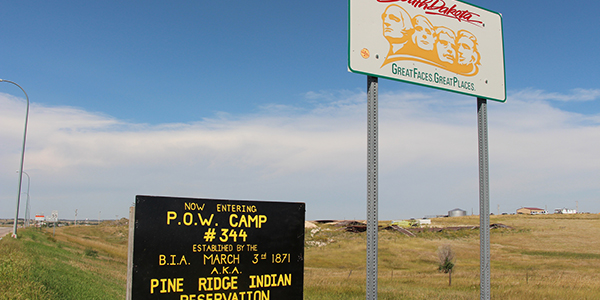 A story about perspective on childhood:

A friend I’ve known for over a decade, whose indigenous to the lands I now call home, saw this high school kid fall off his bicycle. The kid fell backwards, and his helmet slipped towards his nose. My friend, whose recent birthday inched him towards forty, said he watched the EMT’s lift this teenager into an ambulance and hoped he was ok. Later we learned the kid died, and this big brown man’s voice quivered, “Oh no,” He tipped against the wall and started sobbing. He wept at this complete strangers death. I watched unsure of how to react and just told him I was there for him. A few hours later he walked up and hugged me, said, “I’m sorry. Where I’m from, so many young people die.”

I recently visited the Pine Ridge Reservation to witness and stand on the side of the Lakota people who’d invited us. They invited us as allies and take part in an ongoing struggle against Whiteclay, NE. Before getting into the flesh of that struggle, there are things I need to share, things think we must be look at, and try to understand before reaching the actions. See, there are facts, little factoids you learn about place when you’re there. Sometimes about death and addiction. Statistics, and they mean nothing. It’s hard to grasp a % of a thing, when you’re not in the thing. You’re not the one living it.

We heard these numbers as we crossed onto the Pine Ridge reservation. These death and alcohol statistics became more comprehendible as we listened to uncountable stories of known and recently dead: Cousins and siblings– relative upon relative, from car accidents, and acts of drunk random violence. Liver cirrhosis. Died from alcohol. I listened while on Pine Ridge, and everyone had stories, and lists of their known dead. The pizza hut worker who hated Whiteclay, whose brother died of cirrhosis, of alcoholism. A 35 year old women, who lived the streets of Whiteclay, who’d slur at me that she knew it was bad. That Whiteclay had to go, that her father died there. But we ran into her after she’d made the 2 mile trek to Whiteclay, NE from the Pine Ridge Reservation. My trip to the reservation wasn’t only to learn about the history of Whiteclay, NE, but also to listen to stories from the people who struggle against Whiteclay, and called the Pine Ridge reservation home.

We arrived to the Lakota’s homelands by crossing an imaginary border out of Nebraska, into what I’d learn wasn’t the Pine Ridge Reservation to the Lakota who invited us, but was really POW camp 344.

This name referencing the tribal identification number assigned them by the federal government. We were told that each reservation, and thus tribe was assigned a numeric sequence to attach them to the lands their people were now isolated too. While the story of POW camp 344 is far too large for this small article, let it be known that I heard stories of warriors that once fought the United States government, and won victories. The Lakota warriors even decimated one of United States armies in the field. Warriors vs Soldiers.

What I witnessed in against Whiteclay, NE, was a moment of a struggle in a struggle that’s continued for centuries. It’s a struggle against the US government that fears a people, for their abilities to fight back, so much so, that it’s done everything to decimate them. We were told that this place of Whiteclay, NE was placed there on purpose, by the United States government, the same government who massacred the Lakota, who tore children out of their families and forced these kidnapped children into reeducation schools. The Lakota stated simply that Whiteclay, NE’s sole purpose for existing was to ensure that the Lakota never came together. It poisoned them. That Whiteclay’s sole purpose was to funnel alcohol into Pine Ridge. The Lakota aren’t the only one who believes so, the chair of the US Commissioner on Civil rights Mary Frances Berry said that Whiteclay, NE “only exists to sell beer to the Oglala Lakota,” on Pine Ridge.

Whiteclay, NE, sits 2 miles south of POW camp 344′s biggest city of Pine Ridge. Pine ridge’s population 3,308. Whiteclay’s population sits at 14. Whiteclay was created in1904 by an illegal executive order by President Theodore Roosevelt. Roosevelt’s feelings towards indigenous peoples are summed by this quote, “I don’t go so far as to think that the only good Indians are dead Indians, but I believe nine out of ten are, and I shouldn’t like to inquire too closely into the case of the tenth.” Before that Roosevelt’s illegal executive order a 50 mile buffer zone between POW camp 344 and the United States had been negotiated with Lakota elders. This buffers sole purpose was to create a barrier between the people, and illegal alcohol peddlers.  Roosevelt eliminated that barrier, breaking treaties by not consulting tribal elders and leaders, of that buffer zone. Whiteclay, NE was created. The first businesses that moved onto these stolen lands were liquor stores. Four of which operate today.

The liquor stores which serve the 14 person population of Whiteclay sell an average of 13,000 cans of beer a day, most of which gets bootlegged north to Pine Ridge. I went there before the march and days of actions wearing a small yellow flower on my lapel. I was warned to bring something from a good place . I was told I should leave the item there as a way to protect myself. I’m not spiritual or religious, but when I rolled into that town I wore a small yellow flower on my lapel. I brought the flower from a place we camped, where the owner of the land told us he hated Whiteclay. His father’s last words as he succumbed to liver cirrhosis were used only to beg to be taken back to Whiteclay, NE for a drink. I picked that yellow flower from what I was told was a good place.

The town itself seemed out of place and I reflected later that it seemed lost. I wore my yellow flower and was approached by the local street folk, a gathering of Lakota who spent their days begging for change, and hoping for alcohol. They rose up and screamed at me. I watched my Lakota allies talk to them and it was hard to watch as they tried to interact with this group of their own people, who drunkenly begged at the doors of these liquor stores. The drunks said for us to get out, that there was no more warriors left. It was their land, and that all they wanted was change for another can. One of our Lakota allies looked down, angry or sad, it was hard to tell, but I heard him say, “No, no we’re, right here. The warriors are coming back. ” I left the flower attached to the pole of a street sign.

The warriors did come back in the following days with the allies they’d invited. We walked Whiteclay, NE with Lakota warriors for two consecutive days. The warriors armed with their bodies and strong hearts. Lakota warriors stepped in front of Police officers as the officers tried to break up people blockading liquor store doors.

The warriors intercepted drunks who tried to approach, or attack their allies who come to support them. The Warriors turned a corner and 2 beer trucks made quick U-turns and retreated out of the town. For 2 days Whiteclay’s alcohol sales were disrupted. The bar owners turned to recruiting drunks off the street for protection, the police walked us out on the last day intermingled with a line of Lakota alcoholics. Our allies told us, that people need to understand that Alcoholism was a sickness, and never was it so apparent to me than seeing that line of intermingled police and drunks urging us back across the line.

I’ve left POW camp 344, but the Lakota live on there in their struggle. I’m left with the stories and memories resounding in my head and heart. A young women in fatigues telling me that she had been forced into the role of a warrior. That all the men were alcoholics now and so that she had to fight. I’m left with the words of one of the Lakota organizers of the Women’s Peace March. She said that Whiteclay, NE was created to funnel alcohol to the Lakota people”. That the United States government was still waging war on the Lakota through liquid genocide.” That for her people the epicenter for this battle continues to be Whiteclay, NE.

Whiteclay NE, sit’s 200 yards from POW camp 344. A camp ravaged by alcohol, by alcohol related death. Two hundred yards from a peoples’ land who the United States government feared so much, they lied to them under peace flags, and slaughtered them with bullets and cannon. Massacred them with uncountable broken promises. Feared them so much that they tried to organize a way to beat the Lakota out of these people, to break their connections to their history, and traditions. The United States feared the Lakota so much that they broke treaties and promises to elders and took away an agreed on buffer zone to funnel liquid genocide onto the reservation. The Lakota have faced generations of these continued assaults.

The day I left I was taken aside by one of the women organizers of the first days peace march. She looked at me and said, “the first generation is coming of age to not be forced into boarding schools.”The second generation removed from these forced reeducation camps is up and coming.” I stood side by side these generations of Lakota warriors, who unarmed, were able to disrupt the poisoning of their people for two days. I think back to a sign I saw on the edge of Whiteclay, NE which stated, “A sober Lakota is a dangerous Lakota.” Dangerous only to the forces trying to make sure they can’t fight back. Because when they do, like those few days. They win.

We’re a grassroots media collective that runs on your donations.

3 thoughts on “They Call It Liquid Genocide”

DGR NY is a chapter of the international radical environmental and social justice organization, Deep Green Resistance. We recognize that the current ecological crisis and the oppression of vast groups of human beings are systemic; they are inherent to the arrangement of power called industrial civilization, a way of life characterized by breaking the boundaries of the planet. Our work is focused on dismantling industrial infrastructure, unlearning destructive ideologies, and rebuilding just and sustainable communities.

DGR NY is an aboveground organization, but we are unique in our support for smart and strategic underground resistance. Part of our work as the aboveground is to normalize this decisive action.